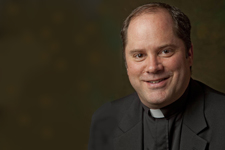 In 2003, Loyola High School began an innovative initiative called the Loyola Work Experience Program (LWEP) to make parochial education affordable to young men living in the city of Detroit.
Videos
Many wonderful things have happened at the school thanks to the work of my predecessors, but I know there is a lot more work to do to give our students the best we have to offer
Loyola High School in Detroit Kicks Off 20th Year with a New President
By Jeremy Langford

“We’re so grateful to Dave for 19 years of service as a teacher, principal, and president,” says Fr. Tim Kesicki, provincial of the Chicago-Detroit Province. “And we’re excited to see Mark lead Loyola through its 20th anniversary year and into its next decade. His appointment highlights the province’s commitment to the school and to Detroit.”

“My excitement has been building since Fr. Kesicki began the conversation with me about my coming to Loyola,” says Fr. Luedtke. “In fact, my response was a hearty, ‘great!’ Many wonderful things have happened at the school thanks to the work of my predecessors, but I know there is a lot more work to do to give our students the best we have to offer.”

Founded by the province and the Archdiocese of Detroit in 1993 as a direct response to the alarmingly high dropout rate of high school males in the city, the all-male Loyola opened its doors to 43 ninth graders in a small wing of the former St. Francis Home for Boys. A year later it moved a mile west into the former St. Francis de Sales School, where it has remained. Since its first graduating class of 1997, every member of Loyola’s graduating classes has been accepted into one or more colleges or universities. The current enrollment is 145 and there are 449 alumni.
“We are exceptionally proud of Loyola,” explains Fr. Kesicki, SJ, who taught theology at the school from 1995 to 2000. “It’s a perfect example of the Jesuit mission to serve where the need is greatest.”

affordable to young men living in the city of Detroit. Based on the Cristo Rey model, LWEP partners with local businesses and non-profit organizations— such as Ford Motor Company, Blue Cross/ Blue Shield of Michigan, and Goodwill Industries—to give student real-world jobexperience and the opportunity to assume part of the financial responsibility for their education.

Don’t miss our article in the Fall 2012 issue of Partners, which features Fr. Luedtke. Click the image at left  for more about Loyola High School and Fr. Luedtke.

“I’ve been so blessed to be a part of Loyola all these years,” says Fr. Mastrangelo. “The only ones who preceded me here were the late Fr. Malcolm Carron, SJ, president; Fr. Ken Styles, SJ, principal; the late Deacon Wyatt Jones, Jr., dean of students; and Debby Flynn, business manager. Now I’m grateful to Fr. Luedtke for being so willing to take on the role of president. I truly believe that Loyola’s best years are yet to come.”


Father Luedtke is no stranger to Loyola—he has maintained a keen interest in the school since he was a novice and most recently joined the board last year and spent the spring 2012 semester “shadowing” Fr. Mastrangelo before taking over as president July 1. A Chicago native, Fr. Luedtke is a graduate of St. Ignatius College Prep and Georgetown University. During his Jesuit formation, he taught at Cristo Rey Jesuit High School in Chicago for three years. Following his ordination in 2010, he spent three semesters interning at Jesuit high schools in Sacramento, San Francisco, and New York City in preparation for leadership roles in Jesuit schools.


“I have been entrusted to share in some small way in the mission of Loyola High School to bring wholeness to the lives of our young men and, through them, to their families and this city,” says Fr. Luedtke. “I feel very much at home here at Loyola. Together with our faculty, staff, families, and benefactors, we will continue to nurture a culture of hope and academic success for young men in Detroit and prepare them to be men of Christian love, justice, and service who act with integrity, compassion, and courage.”