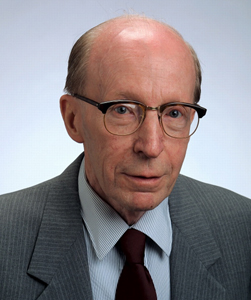 After graduating from Covington Latin School in 1945, Fr. Konerman joined the Society of Jesus in Milford, Ohio, where he remained until 1949.  He received various degrees including a Ph.L. in philosophy (1952) and S.T.L. in theology (1959) from West Baden College in West Baden, Indiana. Fr. Konerman also earned a B.A. in Latin and Greek (1950) as well as an M.A. in philosophy and history (1956) from Loyola University Chicago. In 1966 he received his S.T.D. from Gregorian University in Rome. Fr. Konerman was ordained on June 18, 1958 at West Baden, Indiana, and professed final vows on February 2, 1964.

Among his many assignments, Fr. Konerman taught Theology to seminarians at St. Mary of the Lake Seminary (Mundelein, IL) from 1963-1985 and was the Praeses (chairman) of the ecclesiastical faculty from 1979-1985. In 1967 Fr. Konerman began assisting the Immaculate Heart of Mary Parish and remained there until 1988. From 1976-1996 Fr. Konerman was the secretary for the Catholic Theological Society of America. He also served as the Freshman Dean of the College of Arts & Sciences at Loyola University Chicago from 1986-1995 before spending a year as a coordinator for the NCAA life skills program at Loyola University.  Before moving to Colombiere Center in January 2012, Fr. Konerman was a chaplain for the Poor Handmaids of Jesus Christ (Donaldson, IN).

“He presented some wonderful forward thinking in Theology. During his 16 years as our chaplain he really called us to reflect on the Scriptures in a new way with up-to-date background, the fruit of his own study and research. He was also pastoral, assisting our Sisters and lay residents whenever there was a need day or night,” explained S. Nora Hahn, provincial of the Poor Handmaids. “We are sure he is enjoying his reward for all he gave to us and to all throughout his life.”

Memorial gifts  Memorial gifts may be made to The Jesuits, 2050 N. Clark Street, Chicago, Illinois 60614.
To make an online contribution, please click here