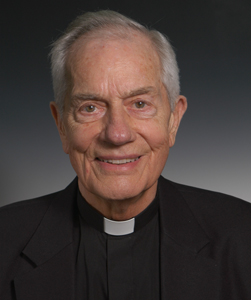 Fr. W. Henry (Hank) Kenney, SJ
“Fr. Kenney began Spiritual Direction for me and we met for 25 years. I will truly, truly, truly miss him. He taught me to be with God and to love him." - Rev. Willis Polk.
In Memoriam: Fr. W. Henry (Hank) Kenney, SJ, 1918-2011
Fr. W. Henry (Hank) Kenney, SJ, Jesuit Priest and missionary to South Africa, died on October 3, 2011, in Clarkston, Michigan.  Born on September 28, 1918, to parents Herbert Kenney and Alice Terstegg, Fr. Kenney was an Indiana native and one of six children (five boys, one girl). Fr. Kenney is survived by his brother James C. Kenney. “He was dedicated to his ministry,” explained Fr. Walter Bado, SJ, fellow Jesuit brother and longtime coworker at Kentucky Jesuit Mission. “He was so dedicated that he just wanted to serve as long as he could, and people appreciated that about him.”


After earning his high school diploma in 1935 from Cathedral High School in Indianapolis, Indiana, Fr. Kenney attended St. Joseph’s College in Rensselaer, Indiana.  It was there that he received his Bachelor of Arts degree in both English and physics (1939). Immediately following college he entered the Milford Novitiate in Milford, Ohio.  For the next 11 years, as he studied to become a Jesuit, Fr. Kenney received numerous degrees including a licentiate in philosophy (Ph.L) from West Baden College in 1946, as well as a licentiate in sacred theology (S.T.L) in 1953. He was ordained on June 18, 1952, in West Baden, Indiana.

Fr. Kenney spent the first 21 years of his priesthood teaching at both the high school and college levels at Loyola Academy in Wilmette, Illinois, (1946-1979) and Xavier University (1957-1967). He traveled around the Midwest serving in various positions such as superior of the philosophers at Bellarmine School of Theology, of the collegiate (First Studies) program at the University of Detroit, and assistant for communities and apostolates at the Province Office (1969-1973).

In 1973, Fr. Kenney took his work to Ghana and Nigeria for spiritual renewal before returning back to his roots as a professor of philosophy in Sudan (1975-1979). He briefly returned to the United States during which time he spent a year teaching at Loyola University Chicago. For the next five years (1981-1986) Fr. Kenney returned to South Africa and served as spiritual and retreat director and superior. “He was a great spiritual director --a prayer coach in many ways,” said Fr. Bado. He joined the Kentucky Jesuit Mission in Lexington in 1987 and remained there for 24 years offering outreaching programs, individual and group retreats, direction of the Bluegrass Spirituality Center, providing chaplaincy to various hospitals and other activities to aid the community. “Fr. Kenney began Spiritual Direction for me and we met for 25 years. I will truly, truly, truly miss him,” said longtime friend of 25 years Rev. Willis Polk.  "He taught me to be with God and to love him."

In July of 2011, Fr. Kenney was moved to the Colombiere Center in Clarkston, Michigan, until his death in October.

Memorial gifts
Memorial gifts may be made to The Jesuits, 2050 N. Clark Street, Chicago, Illinois 60614.
To make an online contribution, please click here