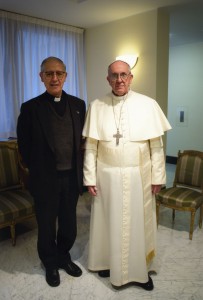 All of us Jesuits accompany with our prayers our brother and we thank him for his generosity in accepting the responsibility of guiding the Church at this crucial time. The name of “Francis” by which we shall now know him evokes for us the Holy Father’s evangelical spirit of closeness to the poor, his identification with simple people, and his commitment to the renewal of the Church. From the very first moment in which he appeared before the people of God, he gave visible witness to his simplicity, his humility, his pastoral experience and his spiritual depth.

“The distinguishing mark of our Society is that it is . . . a companionship . . . bound to the Roman Pontiff by a special bond of love and service.” (Complementary Norms, No. 2, § 2) Thus, we share the joy of the whole Church, and at the same time, wish to express our renewed availability to be sent into the vineyard of the Lord, according to the spirit of our special vow of obedience, that so distinctively unites us with the Holy Father (General Congregation 35, Decree 1, No. 17).