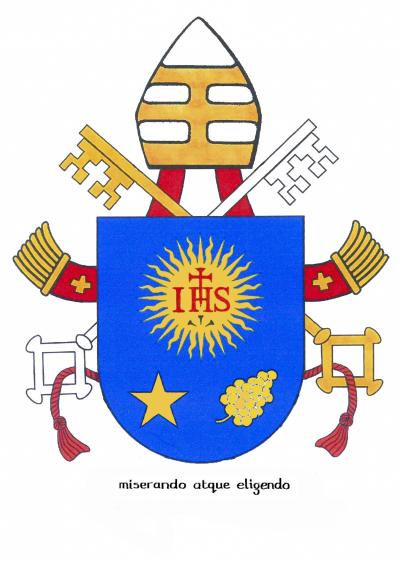 Pope Francis’ Coat of Arms remains the same as what he chose when appointed as an auxiliary of Buenos Aires in 1992: the sun marked with the Holy Name of Jesus, the historic symbol of his Jesuit community; a star for the Madonna, and a “nard flower” representing St Joseph, on whose feast he’ll liturgically launch his ministry as Roman pontiff. The background is blue – the color traditionally affiliated with Mary – reflecting Francis’ intense devotion to her. The Pope’s motto – Miserando atque eligendo: “Lowly and yet chosen” – likewise remains the same, and the striped miter introduced by Pope Benedict XVI to replace the tiara has been retained. Source: http://whispersintheloggia.blogspot.com/
I left the Casa de Santa Marta convinced that the Pope will gladly count on our collaboration in the vineyard of the Lord.
Jesuit Fr. General Adolfo Nicolás Recounts His First Visit with Pope Francis
VISIT WITH POPE FRANCIS OF MARCH 17, 2013
At the personal invitation of the Pope Francis I went to the Santa Marta House, that had been used for the Cardinals present at the Conclave at 5:30 p.m. He was at the entrance and received me with the usual Jesuit embrace. We had a few pictures taken, at his request, and at my apologies for not keeping protocol he insisted that I treat him like any other Jesuit at the "Tu" level, so I did not have to worry about addressing him as "Your Holiness," or "Holy Father."

I offered him all our Jesuit resources because in his new position he is going to need counsel, thinking, persons, etc. He showed gratitude for this and at the invitation to visit us for lunch at the Curia he said he would oblige.

There was full commonality of feeling on several issues that we discussed and I remained with the conviction that we will work very well together for the service of the Church in the name of the Gospel.

There was calm, humor and mutual understanding about past, present and future. I left the Casa de Santa Marta convinced that the Pope will gladly count on our collaboration in the vineyard of the Lord. At the end he helped me with my coat and accompanied me to the door. That added a couple of salutes to me from the Swiss Guards there. A Jesuit embrace, once again, as the natural way to greet and send off a friend.