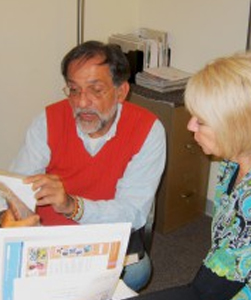 The Jesuits work in more than 130 countries throughout the world, in a variety of spiritual, social and educational apostolates, always present on the frontiers of faith and culture.

In some places, their development offices have well-established systems and processes for raising funds and building community outreach. In others, the work is just beginning. And this is where Fr. Jorge Eduardo Serrano-Ordoñez, SJ, is hoping to bridge the gap – as assistant treasurer for development resources of the Society of Jesus.

Before taking this position in 2010, this native Colombian, who joined the Jesuits in 1969, and was ordained in 1983, worked as director of the peace campaign, “Todos somos hermanos” (We are all brothers and sisters), pastor for several parishes, director of Colombia’s Jesuit Refugee Service, and more.

One of the most important things he’s learned over the course of those years – and which he now preaches as well as practices – is that “people want to be invited to be part of the mission of the Society of Jesus.”

He explains, “When I was doing parish work and asked people to help simply because I knew I needed money to get the work done, a friend was blunt with me. He said, ‘Jorge, you are so selfish. You know my family and I have received so much from associating with the Jesuits in our lives. Why do you not give me the gift of asking me to be useful to the Jesuits?’ It gave me a whole new way of looking at fundraising.”

“I always thought I was begging people for money to do ‘my’ work, so I could be the provider – when they were waiting for me to invite them to be companions in God’s work,” Fr. Serrano-Ordoñez adds.

And that is how he sees his current job: to help other Jesuits recognize this mindset and employ it for the benefit of causes and donors alike.

Toward this end, Fr. Serrano-Ordoñez leads the Society's “Flagship Project” working with Provinces to understand community outreach and fundraising. The original five provinces were Indonesia, Madhya Pradesh (India), Malta, Eastern Africa, and the Philippines. Then these provinces will in turn educate and work with other provinces that have less established fundraising programs. Starting in 2013, they are Lithuania, East Timor, Cuba, Amazon, and Zimbabwe.

“It is important that every province start to look for companions locally,” says Fr. Serrano-Ordoñez. “It is not enough to just seek support from the United States and Europe. We are very thankful for those gifts of course. However, we should not deny any local community the opportunity to say, ‘This is my church; I am helping to build it.’”

“Ultimately, it is my goal to help empower more and more of our provinces to engage laypeople worldwide to support the Society and its work,” Fr. Serrano-Ordoñez explains, “not only through monetary contributions, but also to help us do our jobs better, as advisors, evangelists, energizers, and fellow workers.”

(Read More) about the specific results of the Flagship Project in an informative pdf.